Follow the journey of the duckling in Duck Life 2

Duck Life 2 is the second installment or the sequel to Duck Life 1. Just like other sequels, there are two important things about Duck Life 2. First is the fact that it will be the one that will continue the story that the gamers are looking forward into reading and knowing. Second is the fact that it will continue the level of play that are exciting, challenging and progressing. This time the duckling will embark on a new adventure.

The role of the player in this game is that he or she will be the one training the duckling in order to make it or let it join the World Championships for Ducks. There are five levels in this game such as Enter the Race in which you will have to race with other ducks for the championship, Train Running, Train Flying, Train Swimming and Train Climbing. Play it now on its official site.

Tiny Tower Rips Off a Flash Game - and SimTower 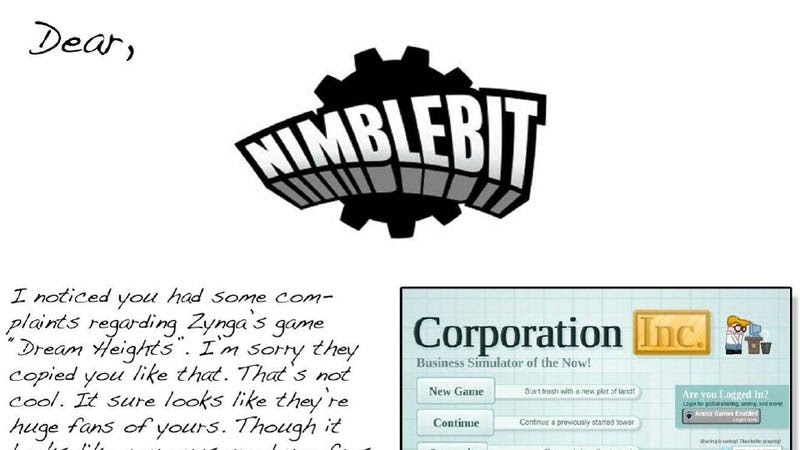 Earlier today, the makers of mobile gaming blockbuster Tiny Tower publishedthe kind of open letter loved by video gaming's instantly and constantly angry fuck-the-man constituency, not least because it can be disseminated byimgur. It alleged that Zynga, the popularly despised maker of Facebook McGames, stole Tiny Tower's idea and was reaping a dishonest profit from it.
On its face, yeah, it seems like developer NimbleBit has a complaint: Zynga'sDream Heights definitely isn't original game design. But is Tiny Tower's, really?
In this rebuttal, we're reminded that NimbleBit's jackpot moneymaker wasn't exactly divinely inspired, either. It seems to have drawn on Corporation Inc., a very popular title hosted by Armor Games. Nor, admittedly, was Corporation Inc.entirely original. The difference is, Corporation Inc. acknowledged its heritage in its credits—and it comes from a title published by Maxis, now owned by that indie outfit Electronic Arts.
But why is this even an issue? Copying isn't theft, remember?

One Man Getting Hit by a Bus Is Another Man's Frogger


At the University of Texas "every Friday before finals there's a thing called 'Foam Sword Friday,'" writes Austin H., a computer sciences major at the university. Students go to the university district's main drag, cross the street during a red light, and then battle it out with foam swords.
This Friday, a freshman named Nick strode forth into the maw of disaster and was hit by a purple bus, which you can see in that video above at the 0:28 mark. Fortunately, the bus was not injured. As for Nick, he came out with "just a scratch and bruise," says Austin.
To pay tribute to the bus's sacrifice (and Nick's), Austin created "Nick vs. Bus", a Frogger variant you can play now—it's also playable on mobile devices. In it, your "Nick" is invulnerable to purple buses, as he was struck by a purple bus and emerged unharmed. You have 15 seconds to cross the street each time. Enjoy!
Posted by Kidz at 10:13 PM 1 comment:

This Funky Slaughterhouse-Five Game is Unstuck In Time 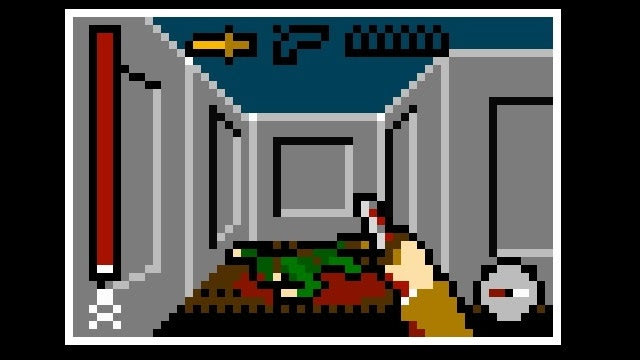 Why isn't Kurt Vonnegut's influence seen in more video games? I couldn't help but wonder that after playing through Vonneguts & Glory, a new (very short) browser game by Shaun Inman based on Kurt Vonnegut's classic novelSlaughterhouse-Five.
It's a weird little thing, a shooter that is unstuck in time—you move backwards, picking up from your death and "unshooting" enemies, bringing them back to life and healing yourself. It's got a pretty cool soundtrack, as well.
The game was created as part of the 7 Day FPS Challenge, which tasks players with creating a first person shooter… in… seven days. Okay you probably guessed that.
The short development time explains Vonneguts & Glory's brevity, but it's fun to imagine where a developer could take this idea if given more time. Something like Braid combined with Wolfenstein 3-D, I suppose?
I bet Soulja Boy would love this game.
Posted by Kidz at 10:12 PM 1 comment: 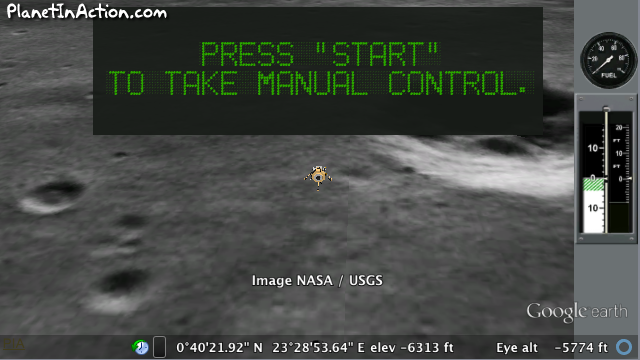 Neil A. Armstrong, first human to set foot on extraterrestrial soil, died today at age 82.
His name figured tangentially in the continuities of some science fiction games—the Armstrong Nebula in Mass Effect was a notable tribute (two other nebulae also were named for early space explorers in that game.) Moon landings have been featured much more prominently in video games since their earliest days.
One web game, made two years ago for the 40th anniversary of the first moon landing, recreates the white-knuckle conclusion to the descent of Eagle, the lunar module Armstrong piloted during Apollo 11's landing phase. As is well known, the vessel's navigation computer was steering Eagle toward large boulders and a crater. Armstrong took manual control and landed Eagle safely, with very little fuel to spare.
PlanetInAction.com's Apollo 11 Moon Lander lets you take control of Eagle at the moment Armstrong did, and attempt to land it softly and safely. You will need the Google Earth plugin.
It is difficult. Don't expect to do it right the first time. Armstrong did, of course, and for it, his name will be remembered for the rest of human history.
Posted by Kidz at 10:10 PM No comments:

Get All the Fallout 3 Terminal Hacking Action You Want, When You Want It 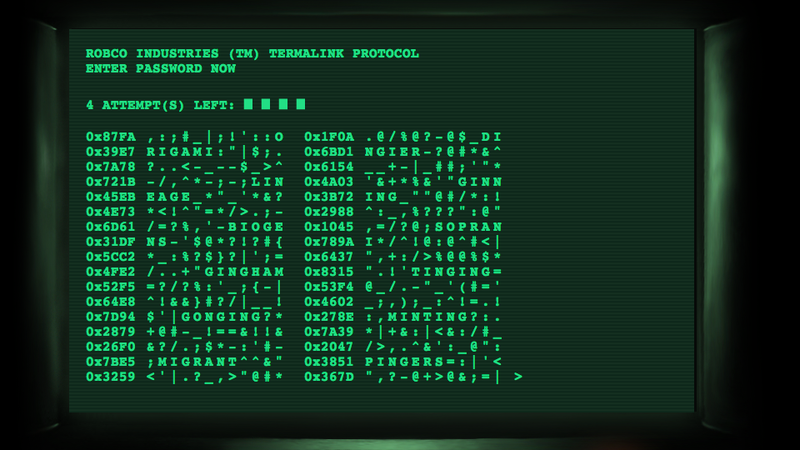 If your Science skill was too low, or if you just enjoyed the LSAT problem of trying to figure out how to brute force hack your way into a terminal in Fallout 3 then this flash game is for you. And look, no need to back out of the terminal before making your final attempt!
Complete with authentic keyboard-clacking and power-switch whoomphing, from mitchellthompson.net is this flash timewaster based on the good ol Robco Industries security protocol. I haven't gone to GameFAQs or my strat guide (yes, I bought one) to see if it's using real passwords or not—I don't think it is. I can't even tell if it has a correct answer or just one chosen at random. Anyway, here you go, drive yourself nuts.
Posted by Kidz at 10:09 PM No comments: 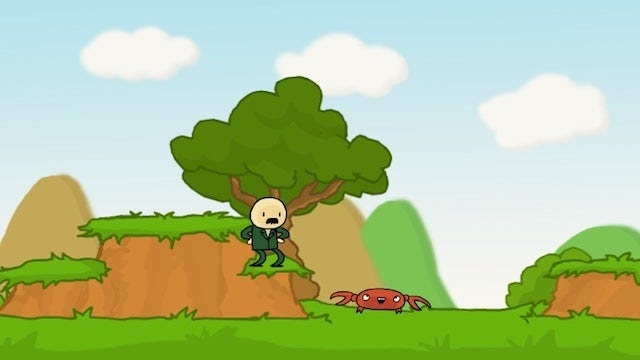 It's a tale as old as time. A man needs to go meet his lady. He sets off, usually to the right. There's a monster in the way. He jumps on it!
What happens next, at least in Marius Fietzek, Benedikt Hummel and Irina Gross' The Visit, will surprise you. And probably, make you laugh.
I won't spoil it—just go play the game yourself, it's free online. Crabs, man.
Posted by Kidz at 8:09 PM 3 comments: